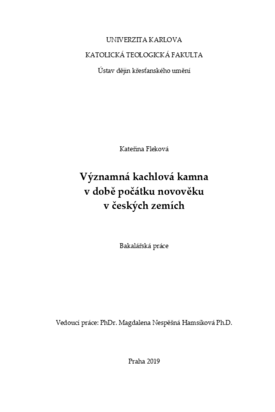 This bachelor thesis deals with Renaissance tile stoves in the Czech lands, focusing on the important examples from the period of 16th and 17th century. Starting with an overview of the pertinent literature in the Czech and Central European context, the thesis proceeds to outline the historical development of stove building and tile manufacturing. The main part then deals with several key examples of the extant Bohemian tile stoves. I have attempted to arrange them in the chronological order, based on the evidence of their construction, reconstruction, transfers and restoration. In some cases it was possible to trace the origin of the tiles in the specific local workshops. In some cases a comparison with analogical stoves or tiles is given, both in the Czech lands and in Europe. The thesis also includes an analysis of the temporal iconographic motives which can contribute to a more precise dating of tile stoves.