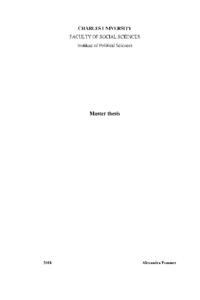 Right-wing radicalism has moved to the periphery of public and academic attention. This is despite the fact that hate crimes are increasing and right-wing populist parties win enough votes to be represented in parliament or even make up governments Europe-wide. In addition, the Internet has made it easy for the right-wing to network and transport their ideology to a large audience. The research, therefore, asks how the German right-wing as a contrast society is portrayed on Twitter networks. Because it is the goal of contrast societies to change the target society in its favor, the Internet offers a space where an ideal society can be created online. Right-wing networks on Twitter will be analyzed with a social media analysis using Twitter statistics, NodeXL Pro and Gephi. The analysis will be conducted by identifying online radicalization themes, like for example hate towards refugees, in the form of hashtags, that constitute the alternative reality created online. The results of the analysis will then be presented in the context of radical contrast society's efforts to change society. This way, it will be possible to come to a meaningful conclusion that includes wider societal implications of the right-wings' networking on Twitter.