Promotion, protection and support of breastfeeding in Greece 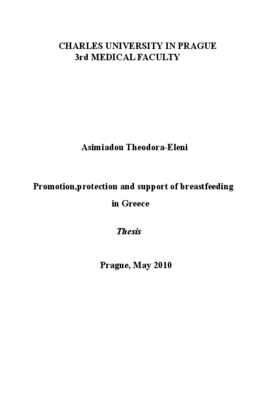 In this work, I have tried to address the issue of breastfeeding regarding the physiology of the lactation, the health benefits for mothers and infants, women's attitudes to breastfeeding and prevalence of breastfeeding in Greece and breastfeeding promotion from organizations in the world and in Greece. However several difficulties may arise with decision for breasfeeding and certain contraindications have been cited in this work as suggested by international and European organisations including La Leche League International and WHO/UNICEF (Baby-Friendly Hospital Initiative). Support and promotion of breastfeeding in Greece is described using the reference to research performed in University of Athens concluding that since maternal milk is extremely valuable nutritionally to the infant, promotion and support of breastfeeding should be even more elaborated to avoid malnutrition and severe medical conditions in the infants, to help the mother attach to the infant early in its life and to reduce the financial load of formula-feeding effects to the society.