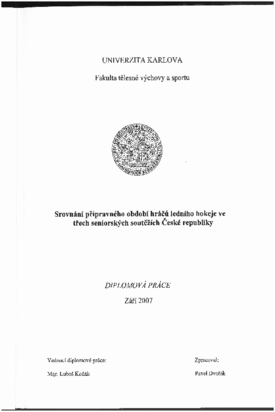 Faculty of Physical Education and Sport

RESUMÉ: Title: The comparison of ice-hockey players preparatory term in three senior leagues of the Czech Republic Work objective: The aim of this thesis is to compare the ice-hockey players preparatory term in our three senior leagues in terms of training quanity, and to find out the outcomes of output motoric tests carried out at the end ofthe term. Method: The survey itself was implemented in the following clubs: Pardubice (extra league), Třebíč (I. league) and Blansko (II. league). In the preparatory term the teams were compared in parallel out of the ice rink, and the output motoric tests were implemented at the end of the term. The mathematical-statistics survey outcomes were used while comparing the teams. Outcomes: The comparision clearly shows that the most exacting preparatory term training belongs to team of the top-level league; nevertheless the best motoric tests outcomes were found out in the I. league Trebic team. Keywords: Ice-hockey, preparatory term, sports training, motoric abilities, motoric tests. 3