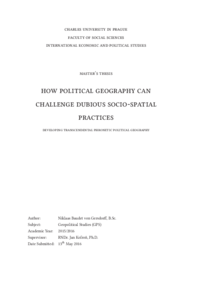 Although an increasing number of donors try to improve the living conditions of inhabitants in informal urban settlements, some studies show that only a very limited amount of provided resources reach those impoverished. The inability of projects to change the situation for the better could point to dubious practices. Despite academia trying to produce socially relevant work, it has failed to translate its criticism into actions at the substantive level. Researchers are perturbed from engaging because of meta-theoretical concerns in regard to normativity, among others. The study scrutinises this dilemma and proposes a solution. It recon- siders the core of critical realism and enhances its metaphysical accounts with epistemological ones from both phronetic social science and the French school of géopolitiques. It argues that political geography can challenge dubious practices in the socio-spatial world without losing neither philosophical nor scienti c rigour. The ideas are assessed in a short study on a development project in Cairo, Egypt, demonstrating their applicability and usefulness. Keywords: philosophy of science - critical realism - phronetic social science - phronesis - Yves Lacoste - géopolitiques - power - space - scale - justice - normativity - poverty reduction