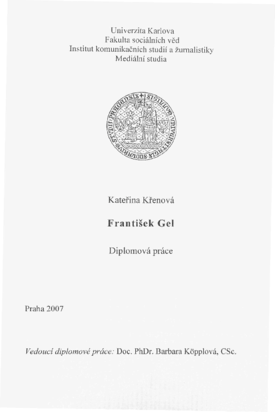 This diploma thesis refers about a famous Czech journalist Frantisek Gel (his own name was Frantisek Feigel) who lived in 1901-1972. After his unfinished studies he wrote for a weekly Soudni sin (Court room) for a while. Then he spent nine years (1924-1933) as a reporter of Lidove noviny, a very important Czech daily newspaper. In 1933 Gel left for Melantrich press. Melantrich at the time was the biggest publishing house in Czechoslovakia. As the World War II started, Gel left for France and became a member of Czech armed forces. While France was occupied byNazis, he came to Great Britain where he worked as a War correspondent. After WW 1I he started to work for the Czechoslovak Radio. He became very popular and famous for his Nurenberg processes' reports in 1946 and 1947. Then he broadcasted Bila kronika (White chronicles) programme. It referred about the brave and nice things people did to each other. Aftera year spent in a diplomatics he started to write the well-known radio programmes which popularized science and history. He retired in 1953. Two years later he started to teach journalism at the Charles University. Powered by TCPDF (www.tcpdf.org)