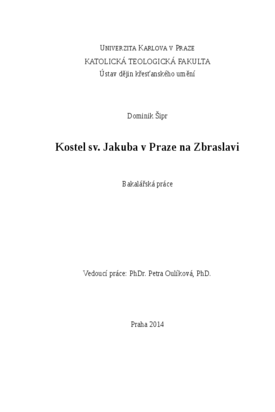 St. Jacob's church in Prague-Zbraslav [manuscript] : bachelor's thesis/ Dominik Šipr ; supervisor: PhDr. Petra Oulíková, PhD. - Prague 2014. - 70s. The topic of this bachelor's thesis is the interior of the St. Jacob's Church in the area of the Cistercians' monastery Aula Regia in Prague - Zbraslav, which was founded by king Wenceslas II in 1291 as a necropolis for the last Premyslides. During the Gothic period the monastery had a four- aisle church with a cloister. In 1420 the monastery was invaded and destroyed by the Hussites. The rebuilt of the monastery began in the beginning of the 18th century (Jan Blažej Santini Aichel, František Maxmilián Kaňka) It was planned to build a church in the monastery compound but it was not realised, the community of monks used the current St. James church. Its interior decorations were made by sculptor Ignác František Platzer and sculpturists from Jan Jiří Bendl's workshop. Pictures were painted by Petr Brandl, Karel Škréta and Giovanni Baptista Piazzeta. In 1785 the monastery was dissolved by Josef II and transformed into a sugar refinery and brewery. Keywords: Aula Regia, the Cistercians's order, the monastery in Zbraslav, Jan Blažej Santini Aichel, František Maxmilián Kaňka, Ignác František Platzer, Petr Brandl, Giovanni Baptista Piazzeta, St. Jacob's Church, Karel Škréta