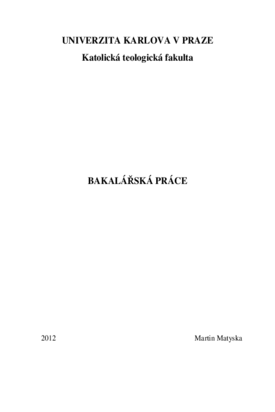 2 Abstract The Antithesis of the Sermon on the Mount in the Gospel of St. Matthew (Mt 5,17−48) The bachelor thesis deals of the with the antithesis Sermon on the Mount, as mentioned in the Gospel of St. Matthew (Mt 5,17−48). It begins with a brief introduction to the theory of the creation of the Gospel of Matthew. By explaining key words and exegetical notes, it attempts to explain the individual antitheses in the context of the Old and New Testaments. It deals with the relationship of the Old and New Testaments, as formulated in the antitheses. Special emphasis is placed on the notion of justice, in the conception of the Old Testament, the Torah, the Prophets and sapiential literature and various opinion groups that operated in the time of Jesus. The concept of justice according to the New Testament is explained particularly in the conception of St. Paul. The work also deals with the ethics of Jesus and its differences from the Old Testament ethics, and is introduced by a question of how to fulfill Jesus requirements stemming from the antithesis.