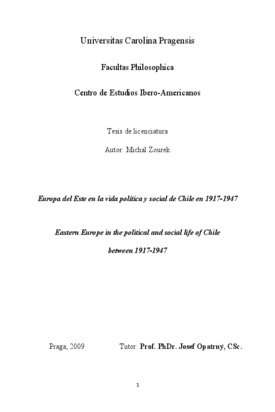 Author of the thesis is concerned with the reflection of Eastern Europe in the political and social life in Chile between years 1917 - 1947 that is in the period between Russian revolution and the beginning of the Cold War. He is describing the official relations, diplomatics and economics, as well as contacts on unofficial level, i.e. political and social. His primary focus lies on the Chilean left thought, especially communism, as an extraordinary strong bond between such distant regions. In this context he is observing historical and ideological genesis of these left-wing streams. Besides that, he is analyzing international matters that were helping (Russian revolution, the Frente Popular government) or hindering (North American influence, political climate after World War II) the penetration of the Eastern European world into the Chilean society.