Chemokines and their receptors in pathogenesis of interstitial lung diseases 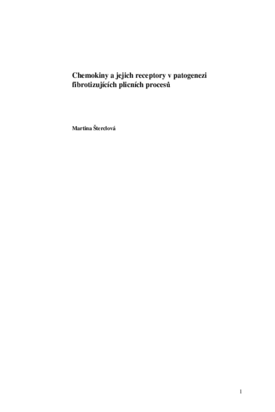 Institute for Clinical and Experimental Medicine

Sarcoidosis and extrinsic allergic alveolitis (EAA) are granulomatous lung diseases with predominantly Th1 immune response. In this prospective study, we analyzed the expression of chemokine receptors CXCR2, CXCR3 and CCR3 on bronchoalveolar lavage fluid (BALF) CD4 T-cells of patients either with EAA or sarcoidosis. We investigated the correlation of chemokine receptors expression, lymphocyte and neutrophil counts in BALF and high resolution tomography (HRCT) pattern. Thirteen sarcoidosis and 6 EAA patients were enrolled in the study. The expression of chemokine receptors on BALF CD4 T cells were analysed by flow cytometry. HRCT scoring system according to Kazerooni EA. was used for evaluation of the disease extent. We have found positive correlation between BALF CD4 T-cells CXCR3 expression and HRCT alveolar score in EAA patiens (p&lt;0.01). CXCR2 expression on BALF CD4 T-cells and interstitial HRCT score did not show a correlation either in the EAA or the sarcoidosis group. Positive correlation between CCR3 expression on CD4+ T cells and HRCT interstitial score was proven in the EAA group (p&lt;0.05). We conclude, that Th2 predominant immune response may play an important role in chronic EAA pathogenesis. The role of chemokine receptors in the pathogenesis of EAA and sarcoidosis should be presumed and investigated.