The impact of national identity on Czech position towards European integration 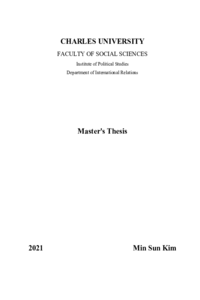 The Czech Republic has been regarded as a little troublemaker of the EU due to its Eurosceptic stances. This phenomenon was distinct in the 2000s regardless of the state's position, whether it was just an EU candidate or already a member state. Around the time, President Vacláv Klaus and his political party (ODS), as Czech leadership, contributed to promoting the Eurosceptic governments towards the EU. It could be seen as strange that such a trait was revealed both in the midst of preparations to join the EU and after its accession when it is the proper time to present a cooperative attitude. Thus, this thesis speculates that the skeptical national identity of the Czech Republic has been constructed throughout history, particularly about 450 years from the Bohemia Kingdom to Czechoslovakia (1525~1971), and affected then Czech domestic politics to formulate the official Eurosceptic positions towards the several EU integration matters (constitutional, security, and monetary integrations). In this context, this master's thesis aims to find an objective correlation that Czech identity had an influence on then Czech Euroscepticism. This way, this thesis expects to advance knowledge concerning Czech identity and its relevance to European politics.