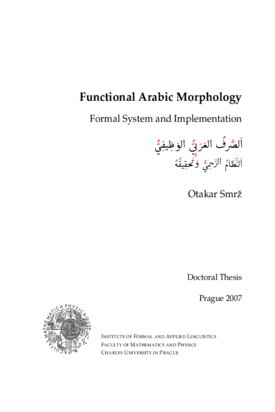 Functional Arabic Morphology is a formulation of the Arabic inflectional system seeking the working interface between morphology and syntax. ElixirFM is its high-level implementation that reuses and extends the Functional Morphology library for Haskell. Inflection and derivation are modeled in terms of paradigms, grammatical categories, lexemes and word classes. The computation of analysis or generation is conceptually distinguished from the general-purpose linguistic model. The lexicon of ElixirFM is designed with respect to abstraction, yet is no more complicated than printed dictionaries. It is derived from the open-source Buckwalter lexicon and is enhanced with information sourcing from the syntactic annotations of the Prague Arabic Dependency Treebank. MorphoTrees is the idea of building effective and intuitive hierarchies over the information provided by computational morphological systems. MorphoTrees are implemented for Arabic as an extension to the TrEd annotation environment based on Perl. Encode Arabic libraries for Haskell and Perl serve for processing the non-trivial and multi-purpose ArabTEX notation that encodes Arabic orthographies and phonetic transcriptions in parallel.