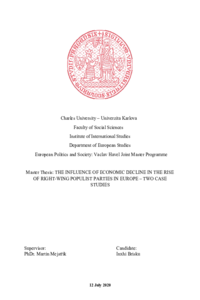 This thesis tests one of the approaches that analyzes the rise of right-wing populist parties, "the economic crisis" approach. The core idea of this theory is that during an economic crisis, there is a rise of electoral support for the right-wing populist parties. The two case studies which are studied are the (Northern) League in Italy and the National Front/Rally in France. These analyses include a brief history of the said parties, their political profile, and the results in elections after the 2008-2009 financial crisis. As well as data on the profile of supporters of these parties and the reasons why they support these parties, and their views on some of the main political and social issues. From the data confrontation it is shown that there is no correlation between times of economic hardship, and the electoral success of these parties. And what is more important supporters of these parties also emphasize reasons related with identity rather than economic problems for supporting these parties. For economic issues they have a similar perception to the rest of the population. Keywords Populism, right-wing populism, populist parties, economic crisis, elections, identity.